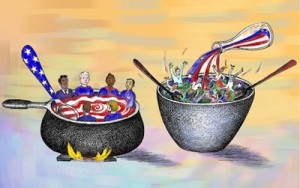 This a trailer for the movie Rent (2005). Rent, originally a Broadway musical, tells the story of several bohemian friends living in New York City, struggling to make a living. Their struggles include AIDS, poverty, and acceptance in the community.  I included this trailer because Rent is a product of the new AIDS artistic movement. The movie gives its audience a view of what peoples’ lives with AIDS probably looked like. I originally got the video from Youtube.

This is the song “Halloween Parade” written and performed by Lou Reed, from his 1989 album New York. I included it in my introduction because it is about people who have died of AIDS. The Halloween Parade is an annual event held in New York’s bohemian neighborhood, Greenwich Village. Reed tells the story of characters who will no longer be able to attend the parade because AIDS has taken their lives. I found this song in a video on Youtube.

Artists Lost to the Disease

This is an image of The Castro, a neighborhood in San Francisco. I included this in Artists Lost to the Disease because The Castro was deeply affected by the AIDS epidemic. This neighborhood has a large population of bohemian artists and homosexuals. Many of its inhabitants died of AIDS. This area also was a large part of the artistic movement created around the AIDS epidemic and was a center of political activism. I originally found the image here.

This an image of Tom Fogerty, rhythm guitarist of the band Creedance Clearwater Revival (CCR). CCR was a San Francisco based band that originated in the 1960s counter-cultural hippie scene. I included this image in Artists Lost to the Disease because he is an artist that died (in 1990) of tuberculosis, brought on by AIDS. Forgerty contracted HIV from an unscreened blood transfusion during a back surgery. Fogerty never revealed his struggle with AIDS during his lifetime because of the stigma associated with AIDS. I found this image here.

This is an image of a part of New York City’s Greenwich Village. In Artists Lost to the Disease I mention Greenwich Village because, like San Francisco’s Castro neighborhood, it was known for its artistic and bohemian inhabitants. This neighborhood was also hit very hard by the AIDS epidemic. Many artists died of AIDS-related illnesses in this neighborhood in the 1980s and 90s. I originally retrieved this image here.

This is Keith Haring’s painting Crack Down. I used this painting in Artists Lost to the Disease because I mention Keith Haring, an artist from New York City who was diagnosed with HIV in 1988. He died of AIDS-related complications in 1990. Haring was a popular artist in the 1980s, known for his graffiti and pop art. Towards the end of his career his art became more political, taking on issues like the war on drugs and the AIDS epidemic. I found this image here. This an image Felix Gonzalez-Torres’s art project “Untitled.” I included this in Creation from Destruction because this art project was created as part of the new artistic movement centered around AIDS. This creation is a pile of approximately 180 lbs of wrapped candy, the approximate weight of Torres’s former lover who died of AIDS. It is meant to memorialize a person who has died of AIDS, similar to Lou Reed’s Halloween Parade and The AIDS Quilt. Viewers are encouraged to take a piece of candy with them. When all the candy is taken, it is replaced by a new pile. This symbolizes perpetual life and death. I found this image here .

This is Keith Haring’s painting Ignorance = Fear (1989). I included this in Creation from Destruction because it is a piece of art from the artistic movement centered on the AIDS epidemic. This is one of Keith Haring’s most widely known pieces; it is was seen by many people in the U.S., which helped to change the public’s perception of the AIDS epidemic. This piece had a strong political message about AIDS, referencing political activist group ACT UP and its Silence = Death poster. I found this image here.

A Change in Perspective

This is an image of the Silence = Death poster, created in 1987. I included this image in A Change in Perspective because it is an artistic creation with the intention of influencing the public’s political opinion. The poster was certainly successful in its mission. It was seen by millions of United States citizens and, over time, the government began to create programs that helped those with HIV/AIDS and funded research to find better treatment options. I found this image here. 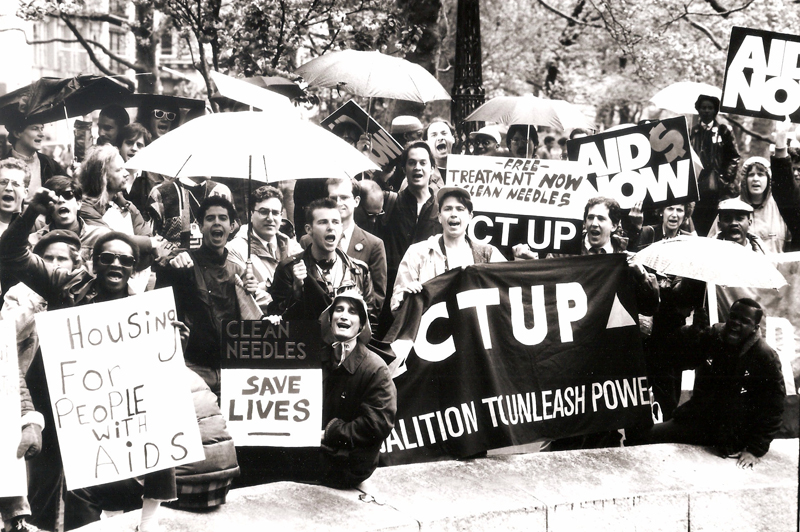 This is a picture taken at an ACT UP rally at City Hall Park in 1988. I included this image in A Change in Perspective  because it shows a group of people taking political action to influence the public’s opinion of the AIDS epidemic. ACT UP was a political activist group created with the purpose of advocating for recognition of the AIDS epidemic. This group and other activist groups were influenced by the new AIDS art movement. ACT UP used the Silence = Death poster to reach many people in the United States. Art was used to communicate a political message, which eventually led to action from the government to help those with HIV/AIDS. I found this image here.

This is an image that boasts a statistic on the Ryan White HIV/AIDS government program, created in 1990. The image states that the program “served more than 50% of people living with diagnosed HIV in the U.S.” I included this in my conclusion because it is an example of how the government has helped the AIDS epidemic in the U.S. The government was influenced by public opinion, which was influenced by the AIDS artistic movement. The AIDS artistic movement, with art such as the Silence = Death poster and Keith Haring’s Ignorance = Fear painting, influenced the pubic opinion on the AIDS epidemic. The public then called on the government for change. Programs such as the Ryan White CARE Act were created to help those with HIV/AIDS. I found this image here.

2. U.S. Army “What Are You Doing for Preparedness?” Poster

This is an image of the U.S. Army’s “I Want You” poster, originally appearing in 1916. I included this image in my conclusion because it is a piece of art that influenced society. This poster first appeared during World War I. It was designed with the purpose of encouraging young men to enlist in the U.S. Army. It was extremely successful. Millions of men would join the army to fight in the war. In my conclusion I state that the arts in general have played a key role in societies throughout history, influencing public opinion and its actions. This poster did just that. Not only did it get people to support the war, but it caused men to actually join the army. I found this image here.